Abstract Refracturing in a plane normal to that of the initial fracture can be beneficial in tight gas fields, even when the initial fracture is deeply penetrating and highly conductive. The magnitude of the benefits will depend on the timing and the penetration of the secondary fracture. The Gas Research Institute has sponsored a project that addresses the conditions required for maximum benefit and the validation of the process with a field trial. This paper addresses the theory and conditions required for maximum benefit. P. 17

Abstract The success of conventional fracturing (using non-reactive fluids to carry proppant) and acid fracturing is dependant on both the creation of effective fracture conductivity and fracture penetration (fracture half-length). With acid fracturing, nonuniform acid-etching (or differential etching) of the fracture face creates lasting conductivity as long as stable points of support (asperities) exist along the etched fracture length. These hold the channels open and connected to the wellbore following fracture mechanical closure. However, both field experience and laboratory work have shown that even fairly competent carbonates soften and creep under closure stresses after contact with acid, thus, potentially resulting in poor retention of acid-etched fracture conductivity. Preservation of fracture conductivity becomes even more challenging in case of high effective closure pressure. Furthermore, acid fracture conductivity is dependant on surface etching patterns, which are determined by uneven permeability and mineralogy distributions. Therefore, a very clean, homogeneous isotropic carbonate may not be a good candidate for acid fracturing since a fairly uniformly etched fracture might close completely at bottomhole producing pressures. Also, carbonate formations with more than approximately 30 percent insoluble components are generally not good candidates because overall acid-etched fracture conductivity may be impaired due to low solubility and also the release of insoluble materials may tend to plug any conductive etched patterns created by the acid. The effective length of the acid-etched fracture is limited by the distance the acid can travel along the fracture and adequately etch the fracture faces before becoming spent. When acid fracturing, the etched length, not the hydraulic length, is considered the effective fracture length. Effective acid penetration will most often be shorter than any proppant placement (due to often high and increasing leak-off rates with time, and high reaction rates, especially at elevated temperatures). An indeed rare, but in theory, powerful well stimulation technique is the combination of acid fracturing (i.e., creation of a hydraulic fracture using reactive acid fluid) with proppant (CAPF) to provide permanent conductivity. Unless proppant is squeezed into the acid fracture before the end of the job, the conductivity of an acid fracture is vulnerably retained pending the stability of asperities all along the height/length of the fracture. Thus, the desire to include proppant in fracture acidizing treatments is conspicuous (but not limited to) "clean" carbonates (exhibiting uniform mineralogy and permeability), carbonates at high effective stress conditions, "soft" carbonates of any permeability (excluding high porosity chalks), low temperature dolomites (with low reaction rates) and together with organic acids where small and vulnerable etched-fracture widths are prevalent. Also, intuitively, effective fracture half-length may be extended if acid (or non-reactive fluids) can transport proppant beyond the etched penetration length "all the way" to the hydraulic tip of the fracture or even extend the hydraulic length for typical short acid fractures. A methodology proposed by Dowell more than three decades ago "Maximum Conductivity Stimulation" (MCS) is probably the first discussion of the idea of combining acid with proppant fracturing. However, the idea did not establish roots in the oil and gas industry for reasons discussed in this paper. Clearly, one missing ingredient was the lack of today's state of- the-art modeling tools for determining suitable applications and procedures. This paper presents and uses a recently developed planar 3D, gridded, FEM (finite element method) multi-layer (with varying percent of limestone/dolomite including non-reactive layers) acid fracturing model. This model fully couples rock mechanics (fracture width and propagation), matrix and natural fracture fluid loss (and effects of acid and non-acid gel fluid stages to increase and reduce fluid loss, respectively), acid reaction/acid diffusion, fluid flow, and proppant/acid transport into a single solution. Such a capability is unique at this time, and, in general, only a 3D gridded model is capable of such simulations due to the complex interactions. Case histories are examined in this paper as possible targets for CAPF. The extraordinary simulation results from modeling of this combined process and its impact on well productivity are discussed. 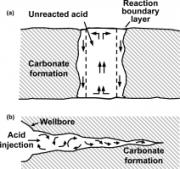 Abstract Well stimulation by hydraulic fracturing is a common method for increasing the injectivity and productivity of wells. This method is beneficial for many applications including oil, gas, geothermal energy and CO2sequestration, however, hydraulic fracturing in shale and other similarly complex geologies remains poorly understood. A 300×300×300 mmblock specimen of Fort Hays Limestone was hydraulically fractured in the laboratory using a true-triaxial apparatus to study complex hydraulic fracturing. This material is a member of the Niobrara Shale formation, a major unconventional oil and gas play in the Denver-Julesburg Basin. Hydraulic fractures were stimulated by injection of plastic epoxy. Injected epoxy clearly marked the fluid penetrated zones of the stimulated fractures, partially preserved the in-situ fracture aperture and bonded the fracture faces to give improved visualization of complex fractures in cross-sections cut after the experiment. The experiment resulted with a complex fracture network including prominent tensile hydraulic fractures, shear activated discontinuities and bedding plane separations. Acoustic emissions, injection pressures and injection rates were analyzed with reference to the fracture geometry to develop relationships between these parameters and to develop means of identifying complex fracture growth, as applicable in field scenarios where the actual fracture geometry is not easily measured. 1. INTRODUCTION Hydraulic fracturing is a well stimulation method where fluid is injected into rock to create new fractures. These fractures are intended to function as high-conductivity fluid pathways enabling increased well productivity or injectivity. The hydraulic fracturing method can be used to improve oil, gas, geothermal, carbon sequestration, and deep waste injection well performance. Design and optimization of a hydraulic fracture treatment is non-trivial due to complexity stemming from multi-physical interactions between the in-situ rock and injected fluids. A comprehensive understanding of hydraulic fracture geometry is critical for understanding and predicting fluid flow behavior through stimulated wells. Fracture geometries in field treatments are expected to be complex, including combinations of tensile and shear fractures [1,2]. This expectation is supported by mine-back studies [3,4] and microseismic monitoring where acoustic emission (AE) sources are typically dispersed through a volume of rock and do not clearly indicate discrete fractures. Some stimulation treatments are thought to produce complex networks of inter-connected fractures, accessing large rock volumes.