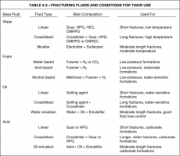 An Innovative Approach to Gel Breakers for Hydraulic Fracturing

Abstract Gelled fluids are routinely used in hydraulic fracturing to deliver fractures with higher propped width, due to the fluids' abilities to deliver higher proppant concentrations than their lower-viscosity analogues. The most common of these gels (borate-crosslinked polymers) have been used successfully in fracturing for decades, routinely exhibiting viscosity >100cP in conventional high-pressure, high temperature (HPHT) viscosity measurements. Recent studies have found that the viscosities of borate gels at actual downhole pressure conditions may be 80% less than that measured using standard HPHT rheometer measurement (which uses 400 psi top-pressure). A proposed mechanism for this phenomenon is a pressure-induced shifting of the crosslink/temperature stability near the "melt temperature" of borate-crosslinked gels, leading to a reversible thinning. A novel approach is posed in the current work to exploit the "pressure effect", by capturing the pressure-thinned fluid in a thin state and irreversibly breaking the gel viscosity. As existing crosslinked-gels with oxidative breakers rarely achieve >50% retained pack-permeability, an improved break mechanism based on pressure could yield sizeable productivity-gain in propped fractures. A series of candidate breaker materials with potential affinity for the crosslinker was screened for gel-breaking performance in the current work. Preliminary screening of these additives led to one preferred alternative gel breaker material which demonstrated superior performance in pressure-induced breaking behavior. This study will illustrate advanced characterization of the breaker performance utilizing realistic sequences of temperature, pressure and shear rate that would be expected for a fracturing treatment. The advanced characterization also included fracture-conductivity measurements comparing a control gel with and without the alternative breaker. Under these conditions, the fluids containing the candidate breaker material showed persistent viscosity-break, while the control fluids recovered their viscosities upon pressure-release. The preferred breaker material performance was further confirmed through a series of experimental conditions varying temperature, pressure (up to 10,000 psi), gel concentration, and breaker concentration. In fracture conductivity measurements, the gel which contained the preferred breaker also showed improved conductivity compared to control fluids without breaker. The current study proposes a new method of achieving break of gelled fracturing fluid, which avoids some of the risks and disadvantages of oxidizer chemicals. These results will suggest the most preferred fluid conditions for applying the new breaker material in hydraulic fracturing.

Summary Hydraulic fracturing is a well-established process to enhance productivity of oil and gas wells. Fluids are used in fracture initiation and the subsequent proppant and/or sand transport. Several chemistries exist for these fluids. This paper summarizes the published literature over the last decade (more than 100 technical articles) and captures the advances in the design of water-based fracturing fluids for fracturing ultralow- to moderate-permeability reservoirs (nonfrac-pack applications). Guar-based polymers are still being used in fracturing operations for wells at temperatures of less than 300°F (148.9°C). To minimize the damage associated with this class of polymers, the industry has attempted several approaches. These included the use of a lower polymer concentration in formulating these fluids and alteration of the crosslinker chemistry so that one can generate higher viscosity values with lower polymer loadings. Moreover, the industry shifted toward the use of cleaner guar-based polymers because commercial guar contains a minimum of 5 wt% of residues, which can cause damage to proppant packs. The review has also revealed that shear and pressure effects on the rheological behavior of borate-crosslinked gels is significant. Although these fluids recover their viscosity after shear, they have been observed to lose a significant portion of their viscosity under high pressures. When fracturing deeper wells in hotter reservoirs, the need arose for a new class of thermally stable polymers. Thus, the industry shifted toward polyacrylamide- (PAM-) based polymers. These synthetic polymers offer sufficient viscosity at temperatures up to 450°F (232°C). Examples include 2-acrylamido-2-methyl-propanesulfonic acid (AMPS) and copolymers of partially hydrolyzed PAM-AMPS-vinyl phosphonate. To address the challenge of high-pressure pumping requirements on the surface, high-density brines have been used to increase the hydrostatic pressure by 30%. Breakers’ chemistry has seen introduction of new materials. These breakers decrosslink the gel by reacting with the crosslinker. They form ligands with the metallic crosslinkers and displace them from the crosslinking bonds with the guar-based polymers. Examples of these breakers include polysuccinimides and lignosulfonates. To minimize the environmental impact of using massive amounts of fresh water and to minimize costs associated with treating produced water, the use of produced water in hydraulic-fracturing treatments has been reported. In addition, the paper captures the advancements in the use of slickwater, which uses drag-reducing agents (PAM-based polymers) to minimize friction. The paper highlights the first use of breakers that were introduced to improve the cleanup of these drag reducers. For foamed fluids, new viscoelastic surfactants that are compatible with carbon dioxide are discussed. The paper also sheds light on the use of emerging technologies, such as nanotechnology, in the design of new, efficient hydraulic-fracturing fluids. For example, nanolatex silica was used to reduce the concentration of boron found in conventional crosslinkers. Another advancement in nanotechnology was the use of 20-nm silica particles suspended in guar gels. The paper provides a thorough review of all these advancements.

Abstract Demand for water used in hydraulic fracturing is increasing continuously due to the implementation of oilfield technologies such as horizontal wells and multistage hydraulic fracturing. The rising cost of fresh water has motivated services and production companies to try to prepare fracturing fluids with less ideal water sources such as produced water and seawater. Technically it is not too difficult to make fracturing fluids for medium-to-low temperature applications using salt water like produced water or seawater. However at high temperatures of, for example, 300°F or more, it is much more challenging to formulate stable fluids directly with untreated salt water due to the damages related to the high levels of salinity and hardness in the water. With innovative approaches and careful selections of fluid additives in our tests, potential fluid issues caused by low water quality and harsh downhole temperatures were resolved or mitigated. A novel high-temperature fracturing fluid system was invented recently that could be prepared with untreated seawater having a TDS of, for example, about 57,000 mg/L. The fluids comprised of metal-crosslinked polysaccharide polymers, and remained stable at high temperatures of 300°F or more. In a typical test, the fluid viscosity stayed above 500cP (at 40/s shear rate) for at least 60 minutes at 300°F. The fluid stability could be further enhanced with the addition of a number of selected nanomaterials. For instance, when one of the nanomaterials was added to the above fluids at a dose of 0.02% by weight or less, the lifetime of the fluid viscosity above 500cP was extended by at least 30%. Tests also showed that, with the addition of the nanomaterials, the viscosity lifetime could remain the same even when the polymer loading was reduced. The fracturing fluids also consistently showed over 90% regained permeability in both coreflow and proppant pack conductivity tests. Overall, the novel seawater-based fluid system shows excellent high-temperature stability, minimum formation and proppant pack damage, and intrinsically low scaling tendency. The synergetic behaviors among the fluid additives and the nanomaterials in the high-temperature fracturing fluids prepared with the untreated seawater will be discussed, and the field-related laboratory test results will be presented in detail.