The final goal in a perforation operation is achieving the maximum production and reducing perforation damage, using optimal completion process. The Dynamic Underbalanced Perforation (DUP) as one of the more recent completion technologies minimizes or even eliminates the perforation crushed zone by optimizing the well's dynamic underbalance. Dynamic underbalance is a transient underbalance process that occurs immediately after creation of the perforation tunnels. The modeling of this process is essential in designing the optimal configuration of the perforation charges to evaluate the perforation efficiency. In this study we propose a novel and efficient numerical method, to optimize the completion efficiency which is rarely attended in the literature. There are five main steps in our modeling procedure: 1. Calculating volume of the gas released in detonation, 2. Calculating inner temperature of the Gun, 3. Calculating remaining gas and energy amount inside the gun, 4. Calculating pressure and casing stability analysis, and finally 5. Calculating perforation skin. Although there are some computer programs that claim to model the DUP technology, none of them uses a fully numerical method. In fact, all of these programs use experimental data and correlations to predict the efficiency of this process.

The zone selected for the initial additional perforation was analyzed and a gun system simulation was performed. After the initial perforating job, surface and downhole surveillance data were collected for perforation performance analysis. Based on this analysis, a wellbore implosion technique was selected for perforation tunnels cleanup to enhance their productivity. Several wellbore implosion job simulations were performed based on various design scenarios. The optimal design was selected and executed successfully. Postjob well performance was then analyzed and compared with earlier performance. Although this implosion technique cannot improve or alter the reservoir rock deliverability, its ability to perform perforation cleanup is expected to be evident from the well performance analysis.

Analysis of the well performance after initial perforations showed a lower productivity index (PI), which was expected considering that the perforating job was conducted through-tubing while the completion was in place. The subsequent well implosion technique was executed successfully, and after that operation, the PI of the well improved, indicating the success of the technique to clean the perforation tunnels.

Because many wells suffer from improper perforation cleanup, this case study provides an important example for such wells, whether old or new, to replicate and instantly enhance their productivity. This technique can also be implemented in injector wells to enhance their injectivity.

Formation sand production is a major concern in brown field operations, especially as the field depletes and water production commences. There are many methods to control sand production in primary well completion; however, it becomes more challenging in producers where no primary sand control is installed initially, and it starts producing sand later in the well life.

Selecting the right method for remediating these wells has become a hot topic with both Operators and Service Providers alike striving to discover effective and economical solutions for their brown-field operations. Currently, the solutions for through-tubing sand control in existing producers are screen hang-offs, through-tubing gravel packing (TTGP) and chemical sand consolidation.

Through-tubing sand screen (TTSS) hang-offs above the producing zone, is an inexpensive sand control method. Unfortunately, these installations are typically short lived, often requiring regular well interventions due to screen plugging or erosion, or sand clean-out operations to remove sand accumulated in the production tubing. Alternatively, TTGP is a robust method to control sand production; however, more equipment is required to deploy the gravel pack which subsequently increases costs significantly in offshore applications. To simplify TTGP and make it economical, a major Interventions Service Provider devised a methodology to install TTGPs utilizing Slickine that reduces the overall installation cost tremendously. The methodology has been proven a great success in the US Gulf of Mexico where over 1,200 applications have been installed.

The pilot implementation of slickline deployed through-tubing gravel pack (SL-TTGP) was executed in three S-Field wells in late 2018 which were shut-in due to higher than permissible sand production. These were challenging intervals in that they were uphole recompletions between cement packers in dual string 9-5/8" casing which had produced sand.

The results from the installation proved that the methodology provides effective sand control and enables reinstatement of production from these wells. Further, the installations were achieved with lesser resources and at lower costs; less than half that of a CTU deployed TTGP. This success has led to further installations in the following year.

This paper presents in detail the case study of the pilot implementation of SL-TTGP, key successes, as well as critical lessons learnt during execution and production phase. It includes the challenges, risks and their recommended mitigation plans, as well as the well performance comparison before and after the implementation both in terms of production and sand count.

The scope of this work is to introduce a technology that measures perforation effectiveness on a stage by stage basis before the hydraulic fracturing process begins. The measurement utilizes surface generated tube waves to interrogate the perforated section of the wellbore. We present three case studies demonstrating how "low perforation quality alerts" mitigate operational issues, achieving the deployment of appropriate stimulation treatments for several operators in the Eagle Ford, Haynesville, and Niobrara formations.

The reflections of tube waves are analyzed to characterize perforation effectiveness on a stage by stage basis. This methodology is non-intrusive, infinitely repeatable and can be performed in the short time interval between removing the perforating equipment from the well and beginning the fracture treatment process. The operators in our study were alerted to stages with a high likelihood of pumping issues such as high treating pressure, screen outs, or low proppant volume placement. Real-time measurements flagged these stages as having poor wellbore connectivity to the reservoir.

Prior to pumping, the operator and crew in the field were alerted to the stages that showed low perforation quality. This allowed modifications to the stage design, such as additional acid, sweeps, finer proppant, gel, increased pad, lower rate, or an additional perforation run. In the cases where changes were made to the design, the objective of mitigating pumping problems due to poor perforation performance was a success. In all the cases where preventive design changes were not implemented, downhole difficulties were experienced resulting in sub-optimal stage execution and/or screen outs. Cost savings in the range of $300,000 on some wells were achieved due to the mitigation of pumping problems associated with poor wellbore to reservoir connectivity.

Perforation quality and reservoir rock geomechanics play a dominant role in hydraulic fracturing operational success or failure. Although there have been extensive studies focusing on the role that perforation diameter plays on treatment efficiency, these studies do not adequately consider the importance of the perforation tunnel (depth and quality of perforation penetration into the near well region). Having real-time, non-intrusive, field-based data that provides a direct measurement of this essential element can influence the execution of the hydraulic fracture design. This mitigates the costly exercise of recovering from a screen out and improves the likelihood of a productive stage. 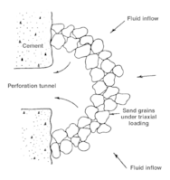 Conventional well completions in soft formations (the compressive strength is less than 1,000 psi) commonly produce formation sand or fines with fluids. These formations are usually geologically young (Tertiary age) and shallow, and they have little or no natural cementation. Sand production is unwanted because it can plug wells, erode equipment, and reduce well productivity. It also has no economic value. Nonetheless, formation sand production from wells is dealt with daily on a global basis.

Prepacking can be defined as any method that intentionally places gravel into the perforation tunnels. Filling of perforation tunnels can be accomplished either with a dedicated operation before performing the gravel pack or simultaneously with it. The technique used is normally dictated by well parameters. Gravel packing cased-hole completions in vertical and deviated wells are more common than openhole completions, particularly in shaley reservoirs. However, cased-hole gravel packs have an important requirement that is easily overlooked.

Abstract Perforations are used to flow hydrocarbons into a well. Impeding that flow are damaged zones from drilling and the crushed zone lining the walls of perforation tunnels into the rock. In addition, charges can affect a region beyond the crushed zone. This region is termed the "fracture damage zone," and the nature of this region is examined in this paper. The fracture damage zone is the area where the concrete model shows altered effects. This region of damage is not necessarily failed, but is the most likely region of fracture. This work discusses the use of a shock hydrocode to delineate this region. Because the hydrocode is a continuous code, specific fracture paths are not predicted. The code is run for big hole (BH). deep penetration (DP), and fracture (Frac) shaped charges. The damaged region is compared for the types of shaped charges. Simulation results indicate that the region of fracture damage follows the bow shock. This semicircular bow shock region continues propagation after the jet has stopped, but eventually diminishes outward from the jet origin. Generally, the BH charge has a wider damage region than the DP charge, with the DP charge damage region being narrower and deeper than the BH (because of the depth of penetration). The damage zone of the Frac charge is between those of the BH and DP charges. In addition, the damaged region may not be sufficiently affected to actually create failure caused by fractures. "Distance" to the fracture limit is characterized. This ready-to-fracture region is discussed in terms of making it a failed fracture region by external influences, such as propellant stimulation.

A new perforating technique employing the integration of conventional shaped charges and solid propellant was described by Albert, et.al. (SPE 197185-MS). The innovative propellant deployment method allows the propellant deflagration to occur in the perforation tunnel rather than gun body and casing, thus delivering maximum energy to improve perforation tunnel performance. Shaped charges utilizing high energy explosives perforate casing and formation with high speed metallic jets that displace by sheer force. The explosive events are fast (20-30 microseconds) high impact events (as high as 1.5 million psi at the rock face) that can collapse large pores in the formation along the surface of the perforation tunnel. This crushing along the tunnel reduces permeability and increases skin and can impact the flow of fluids into and out of the reservoir rock. A number of methods have been developed to improve perforation tunnel flow efficiency, but all suffered limits on either deployment or effectiveness.

The improved perforation tunnel will reduce frac fluid tortuosity. Frac jobs can get better fracture initiation and better proppant placement, resulting in better production. This paper will focus on additional lab testing at an Advanced Perforating Flow Laboratory plus several USA onshore completions (horizontal and vertical). The field data will show the effect of the composite perforation method on frac performance and well production.